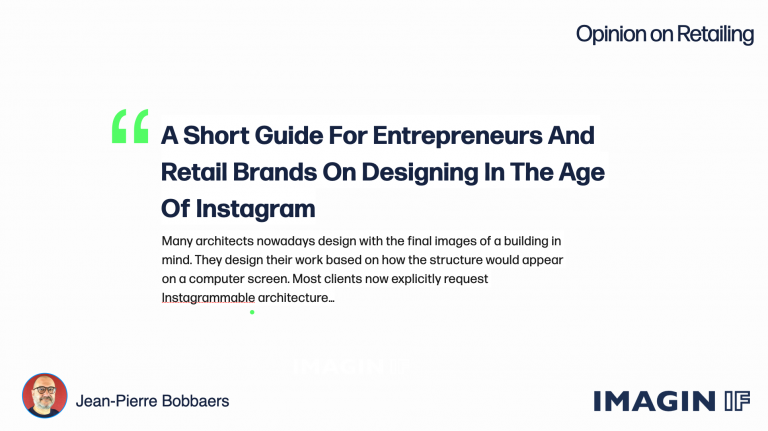 Many architects nowadays design with the final images of a building in mind. They design their work based on how the structure would appear on a computer screen. Most clients now explicitly request Instagrammable architecture, and I believe that the quality of architecture and interiors has significantly improved. Clients are now open to stunning designs from all over the world, both recent and not, and they expect more from a brand’s climate. They are aware of what is being designed in Japan, London, and Shanghai in real-time. They demand the same level of quality for the interiors and buildings in their immediate vicinity.

We need to go back to Frank Gehry’s Guggenheim in Bilbao to understand how this all began. In terms of photographs, it seems that this was the first structure to go viral (as we might say today), as it was published outside of the small circle of architectural magazines. It was completely out of the ordinary, unlike anything anyone had ever seen before, particularly in Bilbao, which had previously been a low-key, traditional city.
It is said to be a sign of the “new Bilbao.” Bilbao demonstrated that modern architecture could be more than just a structure; it can also be a show, and a show brings people, fame, visitors, and, of course, money to a city.
The “Bilbao Effect” was invented and widely repeated from then on.

Parallel to this was the explosion of the internet and, of course, social media, which was undoubtedly not purely coincidental.
The discovery of arches 4,000 years ago, cable-suspended bridges, reinforced concrete, the automobile, and other technological breakthroughs have changed the way we build our world. Cities such as Brasilia, for example, were based entirely on this new mode of transportation.
Social networking and smartphones are altering how we communicate with one another and, as a result, how we perceive architecture. With the widespread adoption of virtual and augmented reality in the coming years, we will expand our senses even more, and architecture will need to evolve once more.

I recall spending a long time in my early twenties in Paris searching for Le Corbusier’s Cite’ de Refuge while standing right in front of its vibrant facade. Since I had only seen black-and-white pictures from my school books, I didn’t know it.
Hundreds of photographs of the building can now be found on Instagram, as well as an incredible 11,900,000 pages on Google. The millions of photographs taken every day by people like you and me, and, more importantly, how people use and view architecture, which could be very different from what architects and clients initially conceived, shape our perception of architecture.
Social networking necessitates regular project updates, necessitating many more photographs and material in general, rather than the 5 or 10 pictures that architects used to take only a few years ago.
This is something to be proud of in our society; atomization and individualization result in a greater plurality of voices and a greater democracy of voices. The art and architecture critic is no longer the superior judge who may praise or condemn years of dedication; it is the people who do it.

People are becoming much more conscious of the engineered world around them thanks to Instagram. Users gather and post information such as signs, facades, color schemes, murals, textures, and more, all in well-curated pages that have little in common with technical publications from only a few years ago.
The new Instagram environment is pressuring architects to create better spaces and clients to be more concerned with what they are buying. This means less emphasis on pure modernist function (at long last!) and more enjoyment for your eyes and senses.
On the other hand, there isn’t much conversation about the work’s deeper meaning outside of the photographs we see on social media. Anything happens on a surface level because we don’t have time for deep discussions while scrolling through our screens.
Today, we must be able to send a message in a fraction of a second. You work by your immediate visual reactions to whatever you see as you swipe through Instagram or Facebook. Shorter attention spans and higher aesthetic expectations have exacerbated this, and we have arrived at a stage where all must be done right away.
This is how we now create and distribute content: We’re under pressure to show pictures of our work that can be grasped in a matter of seconds. So, as architects or entrepreneurs, how do we adapt while maintaining our integrity? How will brands take advantage of this trend?

Maybe architecture has evolved to the point that it must be read on an emotional level first, rather than an analytical one. To stand out among the billions of images viewed every day, both physically and digitally, a building must appeal to your senses, emotions, and guts. It’s like when you see someone and immediately realize they’re The One. Your heart beats faster, and you can’t take your gaze away from them. Today’s buildings and interiors must first pass this examination. Only then can they be judged for their ability to communicate with the environment, reflect the community in which we live, and improve our world be considered.
Maybe, at least before the next revolutionary technology, we’re back to a primitive state of instinctive behaviorism.